Bronze Medalist at the 1996 Olympic Games. 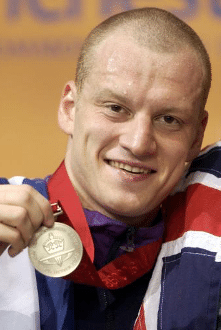 Born in Falkirk, his family moved to settle just outside Manchester when he was three years old. He started swimming, when he was four and joined his local swimming club (Saracens) at the age of eight. Amazingly, he never won a national age group title. Smith competed in three consecutive Summer Olympics, starting in 1996.

He won the bronze medal in the 1500 m freestyle at the 1996 Summer Olympics in Atlanta behind distance legends Kieran Perkins (AUS) and Dan Kowalski (AUS). Three years later, at the European Short Course Swimming Championships 1999 in Lisbon, he captured the gold medal in the same event.

But he failed to qualify for the Olympic 1500 m freestyle in Sydney, Australia (2000), after being beaten in the trials by Paul Palmer and Adam Faulkner. That result was the lowest point in his career. Booking his ticket to Sydney as a reserve in the 4×200 m freestyle relay was no consolation and initially he decided that he would decline his place on the British team and quit the sport but was persuaded otherwise by his family. In 2001 he bounced back and became only the 12th man ever to break the 15-minute barrier (only 12 men have ever set foot on the moon) and won 2001 World Championships silver (1500m) and bronze (800m) in Fukuoka, Japan. His perseverance had paid off.

Graeme’s work ethic was what set him apart. From the age of 12 he would train 10 times a week and at the peak of his career would average a distance of 80km per week in the pool. He didn’t miss a single training session in the two years leading up to the Sydney Olympics.

On retirement Graeme had been ranked in the top 10 in the world on the 1500m (the toughest event in swimming) every year for 10 years.

He retired from competitive swimming after the 2004 Summer Olympics, and returned to The University of Manchester in September 2005 to complete his degree, more than ten years after starting.

Graeme is now a sports agent for a company whose clients include Rebecca Adlington and 1500m Freestyle Olympic medallist David Davies.