Silver Medalist at the 2008 Olympic Games. 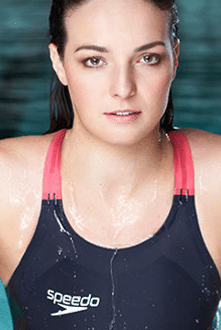 Keri-anne bounced back from a relatively disappointing Commonwealth Games in 2006. On her return she and her coach Sean Kelly decided to switch their training emphasis from freestyle to medley and to start to compete in open water competitions (as she had done for fun in her childhood in South Africa). Within a matter of months Keri-anne had won open water competitions in Israel and South Africa and went on to finish 11th at her first Open Water World Championships.

Keri-anne was less than 2 seconds behind the winner, Larisa Ilchenko, in the 10km at the Olympics in Beijing, and that was after more than 2 hours of racing. A year later Keri-anne got revenge on the Russian by leading her away from the feeding station at the World Championships in the sea off Rome. Ilchenko missed refuelling and eventually dropped out of the race. Keri-anne stormed to gold in what was Great Britain’s best ever World Championships.

Keri-anne and Cassandra Patten (both Stockport Metro) are the only women ever to have competed in both pool and open water events at the Olympic Games. Keri-anne still considers herself to be a pool swimmer and trains primarily for the 200m and 400m Individual Medley.